Chris and his magnificent team of community whale citizen scientists opened up the season last Monday with their first observations of whales at Pt. Piquet even with very dismal weather. On the very first week six humpbacks were sighted from Pt Picquet and approx seven southern right whales were sighted by others at locations between Sugarloaf Rock and Dunsborough. Humpbacks are truly well into their journey north towards the Kimberley, whilst the southern right whales have just arrived to spend their calving season in the south. 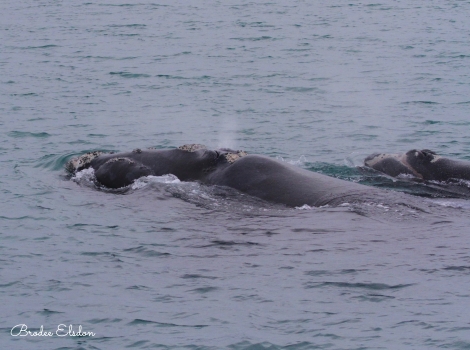 PhD student Angela continues to make great progress, and is now in the final stages of completing her thesis investigating blue and humpback whale vocal behaviour in Geographe Bay. She is in her third year of analysing whale song and social sounds, and identifying how frequently and in what social contexts whales produce these sounds.  She recently presented some of her results at the International Congress on Conservation Biology (ICCB) in Colombia – but more on that soon!

One of the first humpies of the season, a peduncle-slapping calf (Photo: Ian Wiese)

Humpbacks on the move off Augusta (Photo:  Brodee Elsdon)

This year SouWEST has a new team member:  Brodee Elsdon, an honours student with the Centre for Marine Science and Technology (CMST) at Curtin University. She is being supervised by Chris,  Chandra and Monique Gagnon (Dept. of Environment and Agriculture at Curtin University), and is helping to piece together the southern right whale story in the southwest by matching images taken in Flinders and Geographe Bay over the years by Chris, Ian Wiese (a local Dunsborough wildlife photographer), Chandra, and Naturaliste Charters.  Together, Chris, Chandra, and Brodee are working to identify connectivity and site fidelity of southern right whales in the southwest.  Naturaliste Charters and the great crew on the Alison Maree have been absolutely fantastic in offering in-kind support, with Brodee and Chandra coming on board this month to supplement this year’s contribution to the photo-id catalogue.

What a great start to the 2017 whale season!

Humpbacks on the move off Augusta (Photo:  Brodee Elsdon)